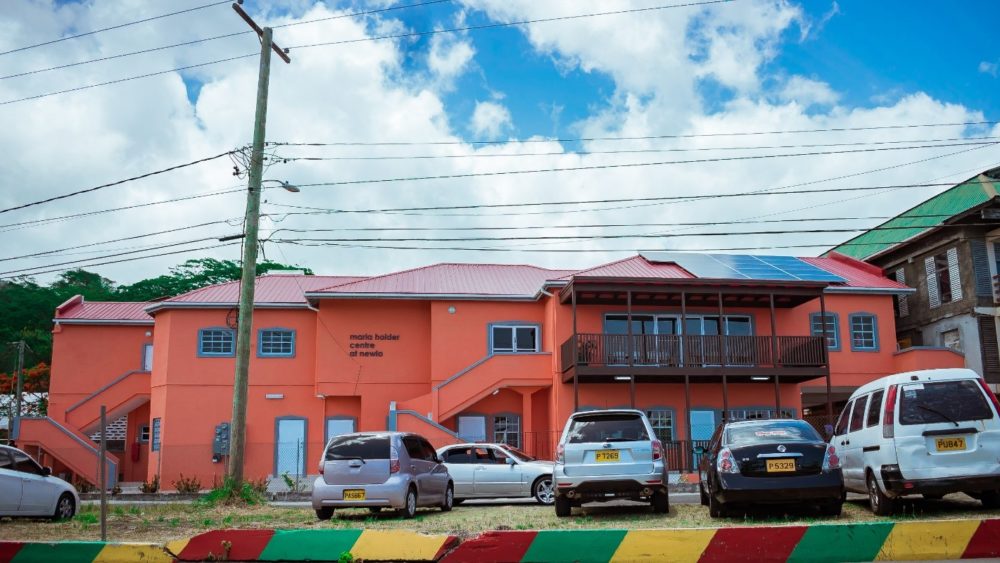 Laluna provided transportation scholarships to 5 NEWLO students
Transportation costs can amount to over $3,000 per year
The Laluna Boutique Beach Hotel and Villas scholarship recipients attending New Life Organisation (NEWLO) said they are constantly faced with having to overcome adversity.

For Shamol Collins of Park View, Gouyave, St John, this reality is all too real. He recalled his experiences growing up in a single-parent household of 3 children, with no father-figure. Most times he skipped school to allow his younger sister to attend school. “My father was not there to support me so it was hard for my mother because 3 of us were going to school. It was hard for her to get the money to send all of us to go to school. It had some days I just had to stay home because I had to look after my sister and my brother to go to school,” Collins said.

For students who reside far away, transportation costs to attend NEWLO can amount to over $3,000 per year; a weighty consideration, since most students come from single-parent households.

Collins and 4 other students at NEWLO have been chosen to be ambassadors of Laluna. This means they will each receive financial support of $4,000 to cover their expenses for the duration of their courses.

Collins, who is pursuing a certification in restaurant and bar within the hospitality department, said he plans to take full advantage, as he aspires to become an interior decorator. “The scholarship I must say is a good head start because from where I was before it is not where I am today. From the day I got it, I was very excited. My parents were excited, even my class teacher was excited, and I am taking advantage of this wonderful experience and I hope to be an interior decorator and also a bartender,” he said.

Sharing similar experiences growing up in a single-parent household among 6 children, Rineka Thomas from St Patrick, who now resides in St David, is set on becoming a professional chef. Thomas is pursuing certification within the commercial food preparation department and has acted upon the advice of her mother to put her best foot forward. She recalled the struggles to attain education with little financial support.

“My family is just my mother alone and 6 of us, so the challenges were very hard financially. We had to strive in every aspect of life to accomplish different things, but if you put your best foot forward as my mother told us… it will bring us to where we want to reach in life. So I try as much as possible to do that, so that’s why I think I got the scholarship.” Thomas looks forward to interning at Laluna upon her completion at NEWLO. “The scholarship is a good help I must say. I’d like to be a professional chef so when I graduate from here, hopefully, I receive an internship with Mr [Bernardo] Bertucci and his family for 5 years and after that, I want to develop more on my skills and further my studies.”

Before receiving the scholarship, Christy Alexis of Woodlands, St George, complained of not having sufficient transportation allowance to get to school. “We had problems getting transportation fees because it is both of us; because it is not me alone, it is both of us and it is kind of hard on my parents to get the money every week for us to come to school.” Alexis promised to work even harder to ensure that the scholarship is retained and she looks forward to being employed in a 5-star restaurant. “After I graduate from NEWLO, I’d like to work in a very expensive 5-star hotel to show out my skills and training that I got from NEWLO, and to further my education abroad and seek jobs in other places.”

Executive Director of NEWLO, Sister Margaret Yamoah, hopes that in the future more students from various departments at NEWLO can benefit from this scholarship opportunity. She said as much is given, much will be expected of these students. “We expect the best in everything that they do… but more importantly for me [is] how serviceable they become to the NEWLO community and their families because we are not training them to be selfish only to gain for themselves. This support that they are getting is to assist their families, and we also want to see them after they have finished NEWLO to be gainfully employed or get themselves involved in their very own small business,” Sister Margaret said.

The other two Laluna scholarship recipients are Summer Charles and Reannah Felix.