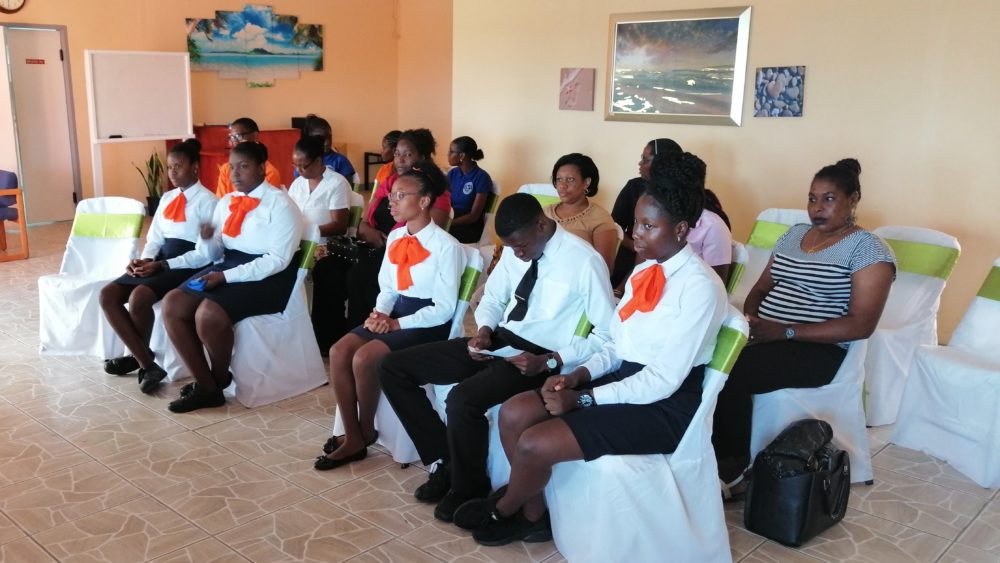 On Friday June 21, 2019, a short Scholarship Award Ceremony was held at the Maria Holder Centre – NEWLO at Palmiste, St. John’s.  The New Life Organization (NEWLO) was the recipient of twenty thousand dollars (EC $20,000.00) which will go towards a Scholarship Fund for five Trainees in NEWLO’s Hospitality Arts Department.  The Fund was presented by the owners of the Laluna Hotel, Mr.  & Mrs. Bernado Bertucci and their lovely daughter, Charlie. The Laluna Hotel is situated in Morne Rouge, St. George’s and offers a unique close to nature and environmentally friendly service in the hospitality and tourism industry in Grenada.

The five recipients of the Scholarship are: Christy Alexis, Woodlands, St. George’s; Shamol Collins, Gouyave, St. John’s; Reannah Felix, Annandale, St. George’s; Rineka Thomas, Mt. Rose, St. Patrick’s; and Summer Charles, Balthazar, St. Andrew’s.  The Scholarship Fund will cover school fees, transportation, materials for practical training and CVQ Fees and will be for a period of one year.  The Laluna Hotel will also provide Internship opportunity for the five recipients of the Scholarship at the end of their training at NEWLO.

In her welcoming remarks, Sister Margaret Yamoah, Executive Director of NEWLO, made special mentioned of Mr. Dickon Mitchell from the law firm, Mitchell & Co. and the Legal Counsel for NEWLO who was very instrumental in securing the Scholarship for NEWLO. She thanked the Bertucci family for their generous donation and impressed upon the recipients of the Scholarship to conduct themselves responsibly both in and out of NEWO and to set the pace for other Trainees to follow.

In his brief remarks, Mr. Bertucci said he was inspired to help NEWLO following the visit he made to NEWLO with Mr. Dickon Mitchell and by the words: “The most fortunate must help the less fortunate.”  He encouraged the recipients to become ambassadors for NEWLO, to learn from their experience, which will help them grow as persons and wished them the best of luck.

Words of appreciation were echoed by a representative of the parents of the recipients, who thanked the Bertucci family for the timely donation, since as a result of the Scholarship, their financial burden has been lifted and encouraged the Trainees to keep up the standard and image of NEWLO.

Other brief remarks were made by Mrs. Shelly Belfon, one of the Instructors in the Hospitality Arts Department and Ms. Carol O’Farel, Skills Coordinator at NEWLO.

The vote of thanks was done by Reannah Felix, one of the Scholarship Recipient.

At the end, Mr. Bertucci extended an invitation to the recipients and their parents to dine at the Hotel on a date convenient to them and told the Trainees to “Remember to put on a smile when you put on your uniform!”